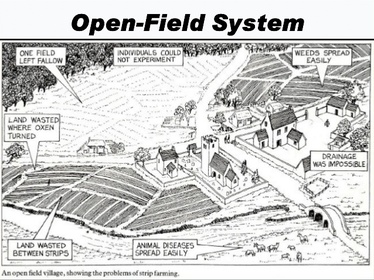 Farming before the industrial revolution was traditional open-field farming which was based on subsistence farming. This meant that villagers would only produce enough food to satisfy the basic needs of the community which consisted of peasants or tenants of the landowner. The open-field system would involve three large fields, which were used to grow crops throughout the year. Two fields would be used to grow wheat and barley and the third field would be left unplanted as the field needed to be fertilized. Every year the crops would rotate, therefore leaving one field unplanted each year. Villagers were all given strips of land to grow their crops, the strips of land were usually spread apart so each villager had equal access to the best land. An open area of common land was used to collect firewood and grazing of livestock took place in the unplanted field which helped fertilize the field for the following year.

WHAT WERE THE ADVANTAGES AND DISADVANTAGES OF OPEN-FIELD FARMING?

The Industrial Revolution improved the agriculture and involved major developments such as the enclosure of open fields and the adoption of new farming techniques. The enclosures involved turning the large open fields into smaller farms owned by wealthy farmers. The farms were all separated by hedges or low stone walls. Smaller farms were then leased to the public. If you could not afford to buy land you were forced to become a paid employee or seek work in nearby towns.

Farmers also adopted new farming methods and techniques including the seed drill, the plough and improved breeding methods. The seed drill had changed the way we planted seeds. Traditionally farmers would plant the seeds by hand. Planting seeds increased wastage as the majority of seeds were blown away by the wind or eaten by flocks of birds. Jethro Tull developed a horse-drawn seed drill that plant three rows of seed at a time. A hole was drilled into the ground for the seeds to be dropped into and the hole was covered. The drill then moved forward to the next planting position. This invention produced five times more crop than the traditional methods. 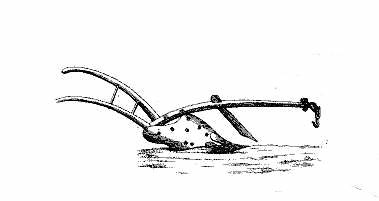 Joseph Foljambe patented the Rotherham triangular plough which has an iron blade that was lighter and easier to use than the traditional wooden plough. The Rotherham plough was handled by two horses and one person whilst the traditional plough required four oxen, a ploughman and an ox driver. The Rotherham plough was proved to be quicker and more efficient as well as reduce the cost for farmers. Farmers started selective breeding of sheep and cattle and this meant that only the largest and strongest animals mated. This produced offspring that had great characteristics.  Farmers started cross-breeding different types of sheep to produce the best breeds for wool and meat production.

HOW DID THIS CHANGE IMPACT PEOPLE'S LIVES?

The Industrial Revolution impacted the majority of people’s live positively and changed the traditional agricultural techniques for the better as the farmers now had the ability to sell crops rather than only grow the amount of crops needed to satisfy the basic needs of the villagers. This increased the amount of food that was available, these surpluses were sold off to feed the urban population and this was potentially profitable.